The customer contacted us about a problem involving a decrease in yield caused by metal contamination (mainly from Cr, Fe, and Mn).
Based on this information, we promptly began investigating the problem, hypothesized that the cause was the SUS piping supplying the process gas, and then commenced verification.
SUS piping with passivation coating is known to be highly rust resistant. However, it is weak in an environment where chlorine ions are abundant. There, the coating breaks down and pitting occurs.
When we checked the actual piping, we found that large amounts of a black chlorine compound had adhered to it and, as expected, pitting had progressed.
We suggested periodic cleaning of the piping and also passivation treatment, and by implementing this suggestion it was possible to solution of metal contamination in the customer’s manufacturing process. 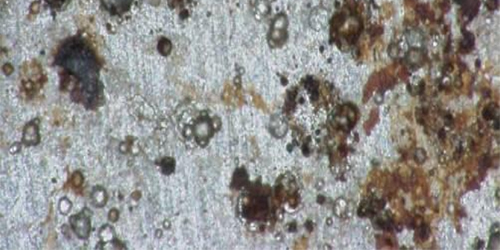 Corroded areas resulting from the pitting were removed, and new passivation coating was formed.